You will arbitrate your employment claim, and you will like it!

This week the New Jersey Appellate Division issued a reported decision finding that the plaintiff in the case, Gilbert Antonucci, had agreed (at least implicitly by continuing to work) to a waiver of the right to have a jury trial and to submit to mandatory arbitration over various forms of employments claims, including but not limited to employment discrimination claims. In 2019 the New Jersey Legislature had amended the New Jersey Law Against Discrimination to provide in pertinent part that “[a] provision in any employment contract that waives any substantive or procedural “remedy relating to a claim of discrimination, retaliation or harassment shall be deemed against public policy and unenforceable.” Thus, based upon the plain language of this statutory amendment it would appear that the “mandatory arbitration” provision at issue in the Antonucci case would be unenforceable on its face.

It remains to be seen how the bill presently awaiting President Biden's signature, which would create a carve-out to outlaw "mandatory" sexual harassment and sexual assault arbitrations, would be interpreted by courts in NJ, especially when an employee's claims consist of gender in addition to other types of discrimination. Arbitration is generally preferred by employers because of the unpredictability of judges and juries, the ability to select an arbitrator with requisite experience, and the cost of arbitration incurred by litigants which weed out some less meritorious cases.

Expect the Unexpected: Why to Hire an Attorney for a Real Estate Closing

When is Final, Final? AKA When can Major be Minor?

You will arbitrate your employment claim, and you will like it!

NJ Pension Law: What you don't know can certainly hurt you. 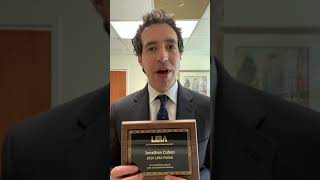